Salmon farmer has big plans post 2020 commercial launch. From 160 to 55,000 tonnes in just eight years, if it has the right investment.

The GM salmon farmer has come a long way since 1989, with it set to harvest around 160 tonnes of salmon from its Indiana facilities this year.

In a financial filing, AquaBounty – which is behind the outfit currently producing genetically engineered-fast growing salmon (AquAdvantage) – is offering USD 10 million of shares. 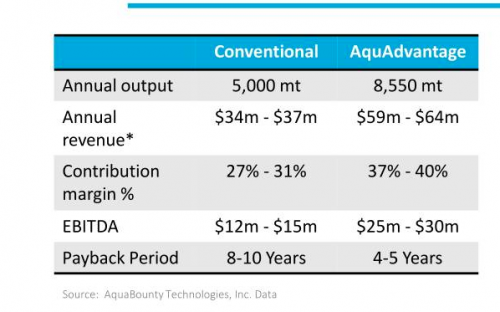 In a report for investors, it wrote that it intended to significantly scale operations and expand its existing production facility. It also had its eye on a “new large plant build-out in the US, Canada, and internationally utilising project-based finance and potential JV partners”.

The AquAdvantage USP is that it can grow faster, and AquaBounty says that its faster growth to harvest accelerates ROI in farm operations – which it says delivers 2x vs. conventional RAS salmon.  Read the article.