Instead of running scared from the “Frankenfish” moniker that’s been slapped on AquaBounty Technology’s genetically engineered salmon by those fighting to keep it from entering the US market, Sylvia Wulf, the company’s CEO, suggested this week that it might be time to instead embrace the title.

The fish, which is more properly identified as AquAdvantage by its creators, grows from egg to 5 kilos in 18 to 20 months (eight to 10 months faster than the reported norm) and maintains a 25% advantage in feed conversion. But instead of being celebrated by everyone for their potential to help fill the world’s need for more protein, some have responded to the fish’s scientifically enhanced traits by grabbing pitchforks, she told the crowd of roughly 275 in attendance at the Recirculating Aquaculture System Technology (RAStech) conference.

That does make it much like the Frankenstein monster in Mary Shelley’s 1817 work of fiction, she said.

“It was the uneducated mob that didn’t understand the benefits of the science that killed Frankenstein,” she said. “And so what I say is, ‘let’s applaud the Frankenfish, because it’s designed to solve real-world global challenges’.” 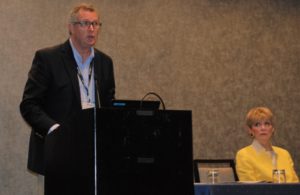 Alejandro Rojas, chief operating officer, and Sylvia Wulf, CEO, at AquaBounty Technologies, were the keynote presenters at the RAStech conference, in Washington, DC, this week.

“And to the vocal minority that says ‘I don’t want GMOs in my food’; 80 years of GMO. I don’t think people are dying from eating GMO crops. And, in fact, we’re not going to feed an additional 2 billion people without moving past conventional methodology.”  Read the article.